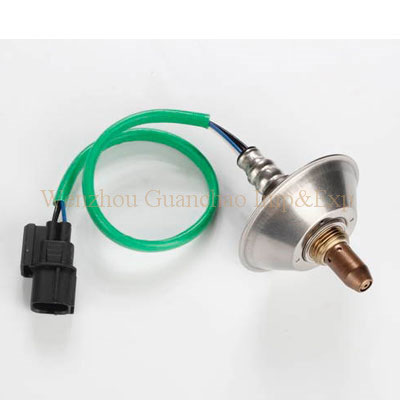 (1) The ceramic of the oxygen sensor is broken, the ceramic is hard and brittle, and there is a strong knocking sound or air-blowing sound, which may cause it to break and become invalid. Therefore, special attention should be paid to replacing it in time when problems are found;
(2) During the closed-loop control process of the engine using the oxygen sensor, the air-fuel ratio of the mixture is always controlled near the theoretical air-fuel ratio, and there is almost no excess fuel in the exhaust gas, but enough fuel needs to be supplied just after the engine starts.
(3) The resistance wire of the heater is burned. For the heating type oxygen sensor, if the resistance wire of the heater is ablated, it is difficult to make the sensor reach the normal working temperature and lose its function;
(4) Lead ions in fuel or lubricating oil additives chemically react with the platinum electrode of the oxygen sensor, resulting in a decrease in the catalytic performance of the catalyst platinum, which is called lead poisoning;
(5) Oxygen sensor poisoning is a common and difficult to prevent failure, especially the frequent use of leaded gasoline vehicles, and even a new oxygen sensor can only work for a few thousand kilometers. If it is only mild lead poisoning, you can use a box of Unleaded gasoline to remove the lead on the surface of the oxygen sensor and restores it to normal work, but often due to the high temperature of the exhaust gas, it invades its interior and hinders the diffusion of oxygen ions, making the oxygen sensor invalid and can only be replaced;
(6) There are silicon ions in the silicon sealant on the engine, silicone resin molding parts, and silicon additives in castings. These silicon ions will pollute its outer electrodes, and the silicone rubber used for sealing the internal terminals of the oxygen sensor will pollute the inner electrodes.
(7) Carbon deposits, due to poor combustion of the engine, carbon is formed on the surface of the oxygen sensor, or deposits such as oil or dust enter the interior, which will hinder or block the outside air from entering the interior of the oxygen sensor, making the output signal of the oxygen sensor misaligned, and the ECU cannot Correct the air-fuel ratio once, resulting in carbon deposits. The oxygen sensor supplier kindly reminds us that it is mainly manifested in the increase in fuel consumption and the obvious increase in emission concentration. At this time, if the deposits are removed, they will resume normal operation.

Can you drive with a bad oxygen sensor?
The oxygen sensor is broken and cannot be turned on. It is a key sensing component in the control system of the EFI engine. It is also a key part to control automobile exhaust emissions, reduce automobile environmental pollution, and improve the quality of automobile engine fuel combustion. It is installed in the engine exhaust pipe. superior. The oxygen sensor supplier tells you that once it fails, the computer of the electronic fuel injection system will not be able to obtain information on the oxygen concentration in the exhaust pipe, so it will not be able to perform feedback control on the air-fuel ratio, which will increase engine fuel consumption and exhaust pollution, The engine has unstable idling speed, misfire, surge failure phenomena, etc.

The oxygen sensor is broken, can it not be repaired?
Can't. It has an impact on fuel consumption and power performance. Oxygen sensor suppliers suggest replacing or repairing it. If it is not repaired, it will affect the power and fuel consumption of the car. Do oxygen sensors need to be replaced regularly? Periodic replacement is not required. If there is no problem, there is no need to replace it. Under normal circumstances, there is no problem with using an oxygen sensor for 100,000 kilometers. The normal situation means that the owner usually maintains the vehicle on time and does not drive violently.